It's amazing how much of life is spent learning the obvious.  There is what we know, and then there is what we actually understand.  They are not the same.  So I apologize in advance for the painful obviousness of the following thoughts.  The fact that this should not be worth remarking on is the very thing that I am struck by...that is, for the moment, remarkable.  The following statement of the obvious begs questions that I suppose I'll spend some time on.

I consider myself a reasonably open thinker with a willingness to unpack my assumptions and understand the world from other viewpoints.  I have taken dozens of courses in what we call the Humanities and have a strong background in the sources and wanderings of Western civilization.

I have always thought it would be useful to travel and see the world.  Well, sure, of course that's true.

Time takes on a new focal point.  Although I entered these travels with the intellectual understanding that time need be measured in much larger units than we apply to our new and energetic federation here in North America, a shift has most definitely slipped me off my comfortable stance.

I am an avid reader of historical fiction.  As a young person I loved the novels of the American revolution and the civil war which brought those conflicts to life for me.  I continue to read historical fiction, but also now enjoy the biographies and histories of writers like David McCullough and have read Shelby Foote's lengthy history of the Civil War twice (thank you Barry Edwards, who would like me to return those volumes some day).  In all of that reading the events and personalities of that period of time sat comfortably far off in the distant past.  The nineteenth century was a very effective barrier between the modern and the ancient such that the colonization of North America and the resultant development of a new nation were very much things of a distant, though enormously interesting, past.

Tonight, as I sit reading McCullough's description of Americans in Paris in the early nineteenth century, I realize that these men and women, who were born after the American Revolution and lived into the period of the Civil war, created a bridge of a single generation between the people and events of those two rumbling moments in American history, and that someone born around the time of the Civil War could easily have lived through to World War II, which lands them smack in the middle of the recent history of the twentieth century that feels pretty much like a part of the living history of people I have known in my own life...now...today.

It is a short history.  A history that when measured in complete lives rather than generations is really only the history of three or four lives.  A few heartbeats.

There is something to be said here about the arrogance of our rhetoric and the untested mettle of our political experiment.  History is long and arduous and this experiment has really just barely begun.

But that isn't the real point, however much it might be worth exploring and considering.  The real point is that I have lived my life on the assumption that the center of all things -- politically, economically, artistically -- that although there was this thing out there that I knew about called Greece and that it was the source of something we called Classical Humanities and that it spent several thousand years flowing through Europe before it found its way to my home -- that never the less all things were centered here.  Where I am.  Which, arbitrarily, is in the midwest of North America.

It's not just time.  It's everything.  I have discovered that even though I knew that Oedipus was written by Sophocles in the fifth century BC and that it was written in Greek...as much as I knew that, I didn't really understand it.  All I knew was that largely I didn't enjoy the experience of reading it or of seeing performances of it now...here...in my enlightened modern world.  It seemed too broad.  It seemed too direct.  The realities of the characters escaped me.  For what it's worth, I was willing to believe that the problem sat in my own failure.  I didn't understand it, and for the most part it was easier to just dismiss it. 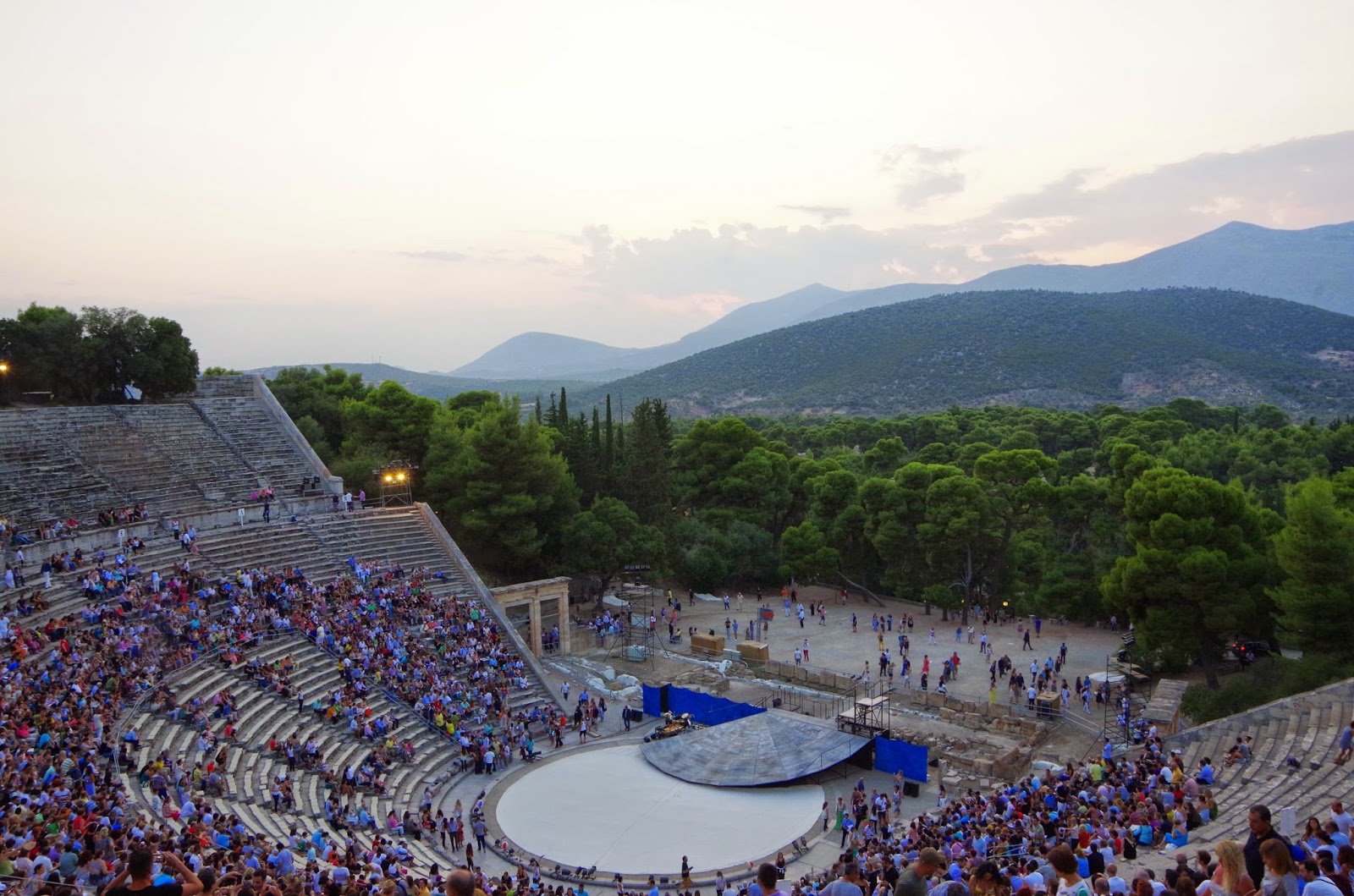 Eureka!  Greek plays make more sense in Greek.  Even without understanding Greek it makes more sense in Greek.  Language is more than just different ways to codify words.  Language speaks to the character of a people.  To the essence of the people who live in a particular place at a particular time.  It is the primal expression of the values and characteristics that make a people themselves.  The sounds of the language speak to the history and culture of a people.  In Hippolytus, a woman can find the deep emotional horror and anguish that comes from a love that is forbidden at the elemental level of society's existential boundaries and express that horror and anguish in words.  In Greek, that emotional eruption rings true and carries beyond the stage and into the souls of the audience.  In English, it really doesn't manage to do that.

Oh, sure, a talented actress or actor can make it work.  They can find the truth in the text and make it real in ways that wring pathos from the stiff necks of an audience.  But I have trouble believing it and it is difficult to fit into the language of a people whose character and values are misaligned with the voice of the story.

And having heard it in Greek, that makes sense to me in a way that it didn't before.  We're just copying something...and it's a copy that struggles to retain the color and clarity of the original.

And Moliere sounds better in French.  And, you know what?  Theatre didn't originate on Broadway.  There's this place called London where if they could keep from burning the damn theatres down we'd be seeing shows in the same place they'd been doing them for over 400 years.

I knew all this.  Still and all, somehow it's something I never really knew.
Posted by Unknown