This is based on a very short trip to Morocco, so this in no way purports to be a knowledgeable recommendation, but on the other hand, I got really lucky with my lodging in both Tangier and Fez, so there are a few things here that may be useful to anyone planning a journey.  If you are concerned about street hustlers, take a peek at my blog entry on my experience with this as well as some reflections on those experiences. 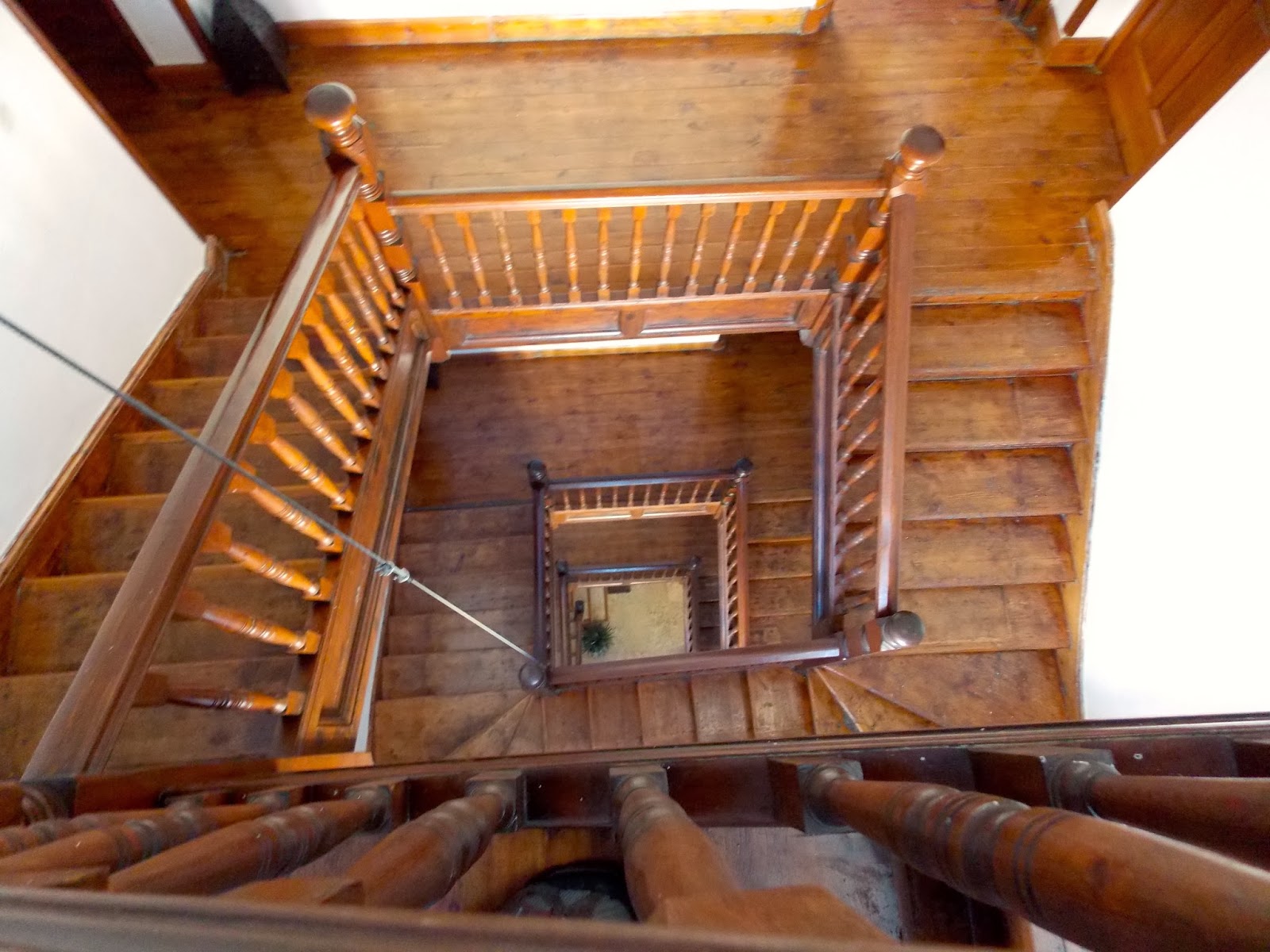 For my first night in Tangier, I stayed at Dar el Kasbah.  This is an old hotel located alongside the old Medina in Tangier.  I had a single room for fifty Euro, which I booked through Expedia.  The place is charming, consisting of a stacked set of rooms accessed by a towering staircase.  At each level there were six or seven rooms opening on to a common landing.

The bathroom was super small, but it did the job.  There is a nice little breakfast, but I woke up late and wanted to get going, so I didn't take advantage of it.  The best thing about this place was that it was located in the middle of an area that bridged the ancient medina and the newer section up the hill.  Consequently, I was able to easily access both areas on foot.

To get to the Dar el Kasbah, take a cab.  Cabs from the airport are pretty straightforward and you can expect to pay 100 to 150DH.  If there's no meter establish the price up front.  If you arrive by ferry, there are two strategies to getting through the ferry station.  If you don't want to overpay for your cab, disentangle yourself politely from the various folks who will try and become your friend and keep moving through the station.  Exit down the stairs and walk to the official petite taxi stand.  You will want to get in a taxi that is blue and actually has a meter and your cab fare will just be a couple of dollars.  There is a place to exchange your currency just to the left of the taxis.

On the other hand, if you don't mind overpaying a bit, you can go ahead and hire a taxi as soon as you exit the ferry.  In this case, negotiate the price up front because their won't be a meter.  Tell them you are going to the Dar el Kasbah and when they say they'll take you there, offer fifty Dihnar.  This is about six dollars US.  It's way more than you need to pay, but on the other hand you now have someone who will assertively usher you to your hotel.  It's a bit of a lark.  You could pay as much as 100dh and it's still a bargain by Western standards. 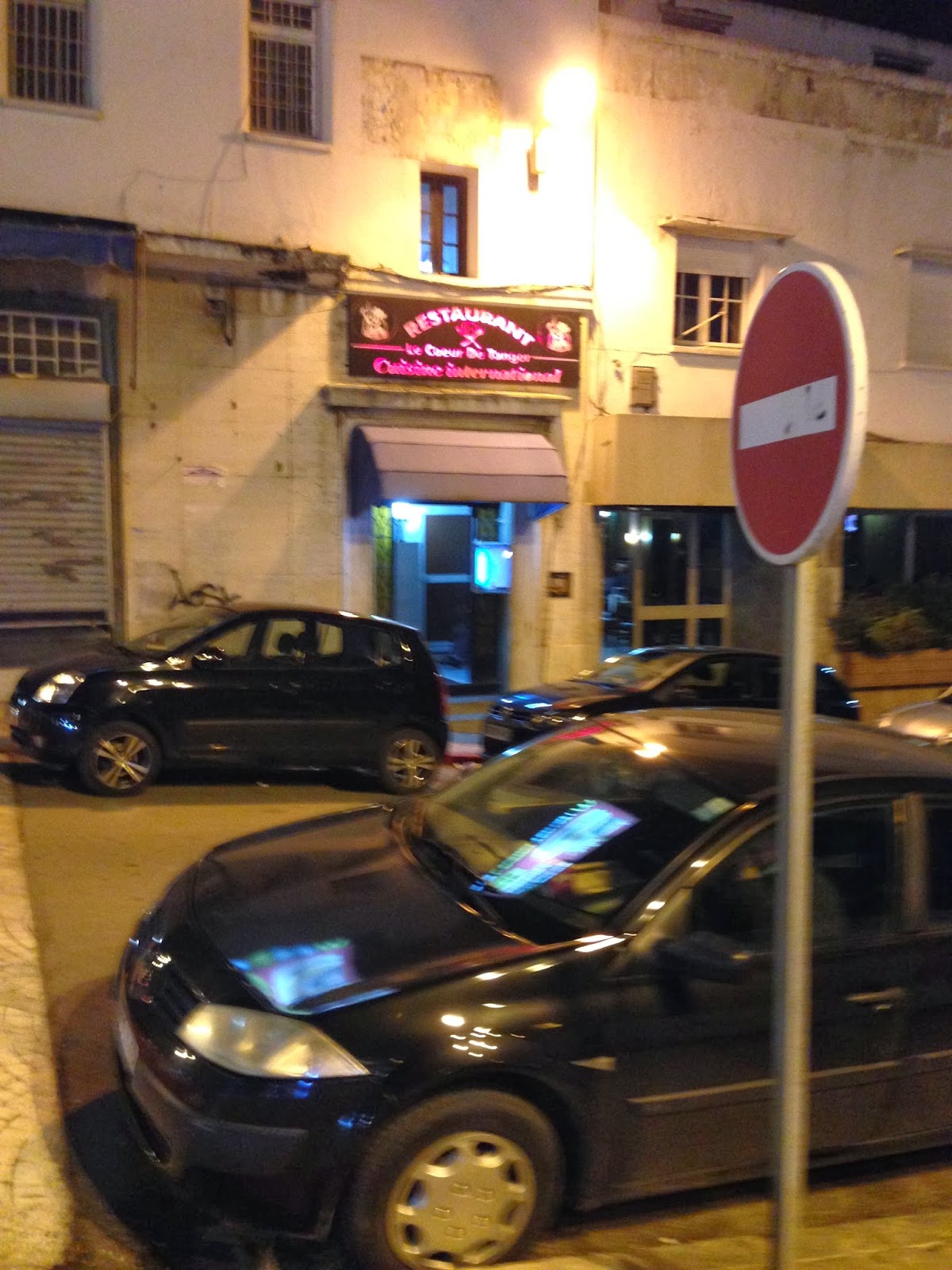 The young host working the desk, whose name I didn't capture, gave me a number of very good recommendations.  If you are looking for a nice place that feels a bit more like home to have a cocktail, I recommend Le Coeur de Tangier, located above the Cafe de Paris near the French Embassy.  To access it you go upstairs and it seems like you might be in the wrong place, but keep going.  Drinks come with a nice plate of fish and are about $5E each.

Cafe Haffa is also worth a look.  This is a bit  hard to find.  Get a good map and when you head down the side street veer left sharply after a hundred yards or so.  [If you stay to the right there is an open space with a view to the sea, but nothing else is over there.  Take a peek if it's nice out, but then head back to the street to go down the hill to the cafe.]  Go in the afternoon as it is in shade in the morning.  Seating is tiered on a hillside overlooking the beach and crashing waves from well up the hill, so the setting is quite excellent. 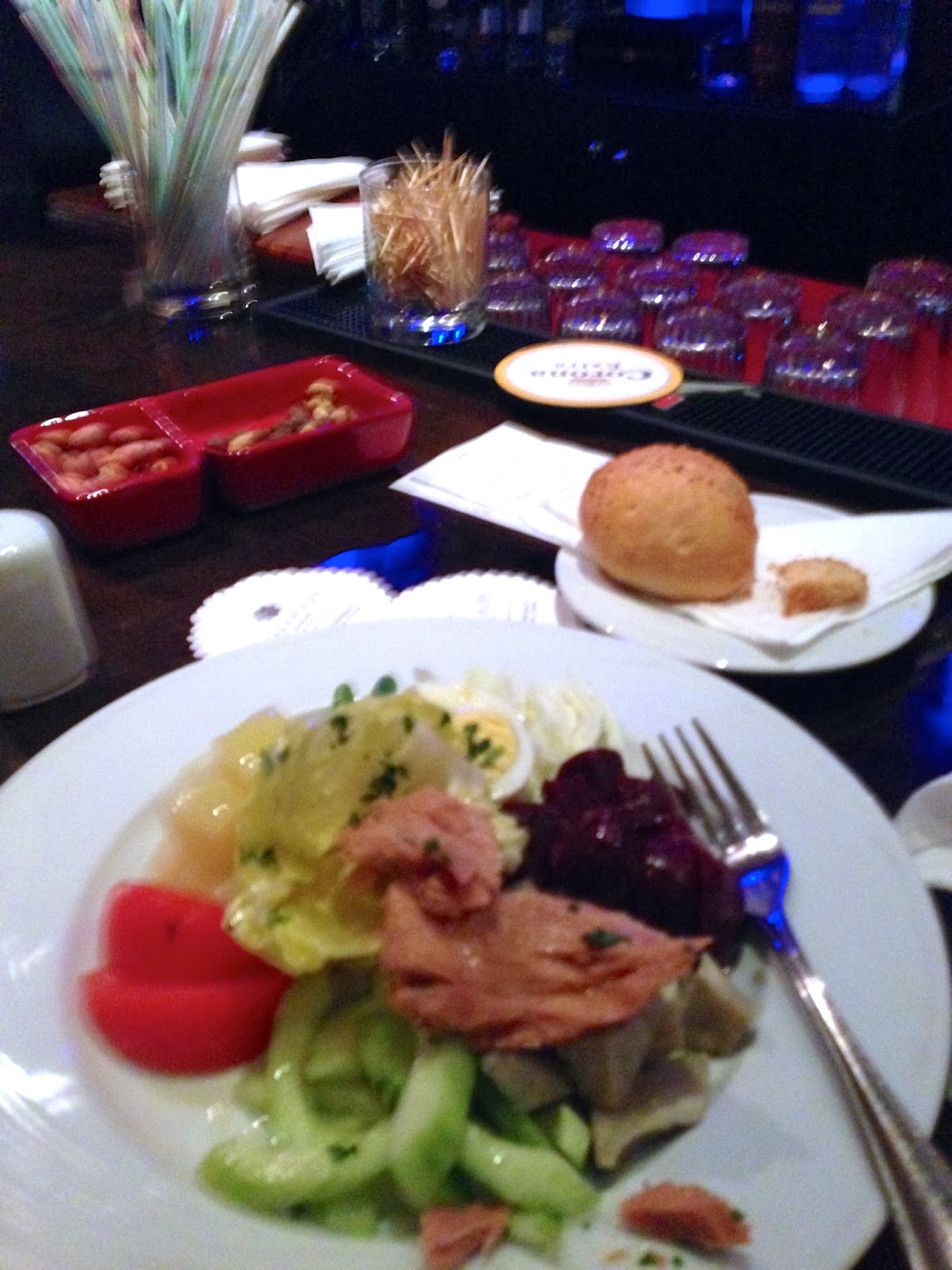 When I returned to Tangier I stayed at the Atlas Rif and Spa, which is a French hotel located along the coastal road on the north side of Tangier.  This was a really nice hotel which has a bunch of bad reviews on Expedia.  Not sure why.  The reviews all relate to service, but I had no problem.  The bar and restaurant were staffed by friendly, helpful folks as was the front desk.  No one spoke much English, but the basic transactions were not hard to negotiate.  I selected this modern setting after having been pretty overwhelmed by the cultural differences in Fez and wanting a night of comfort and familiarity while still staying somewhere that differed from the standard fare back home.  I had dinner in the bar, which was very classy and the meal featured a plate of fresh vegetables and fruit along with some tasty fish.  It also included a hard fruit that was very much like a meat in its flavor and texture, which the bartender explained was a Moroccan artichoke.

I took the train in both directions between Tangier and Fez, which was a pleasant journey away from the coast and up into the foothills of the Rif mountains.  The train, which takes about four or five hours, cost less than $20 for a seat in a first class compartment.  First class is nice as there is more likely to be someone in your compartment who speaks English and you may meet some interesting folks.  If you bring food it is customary but not required to offer to share.  While riding the train I met several wonderful locals including a teacher and a young, energetic entrepreneur. 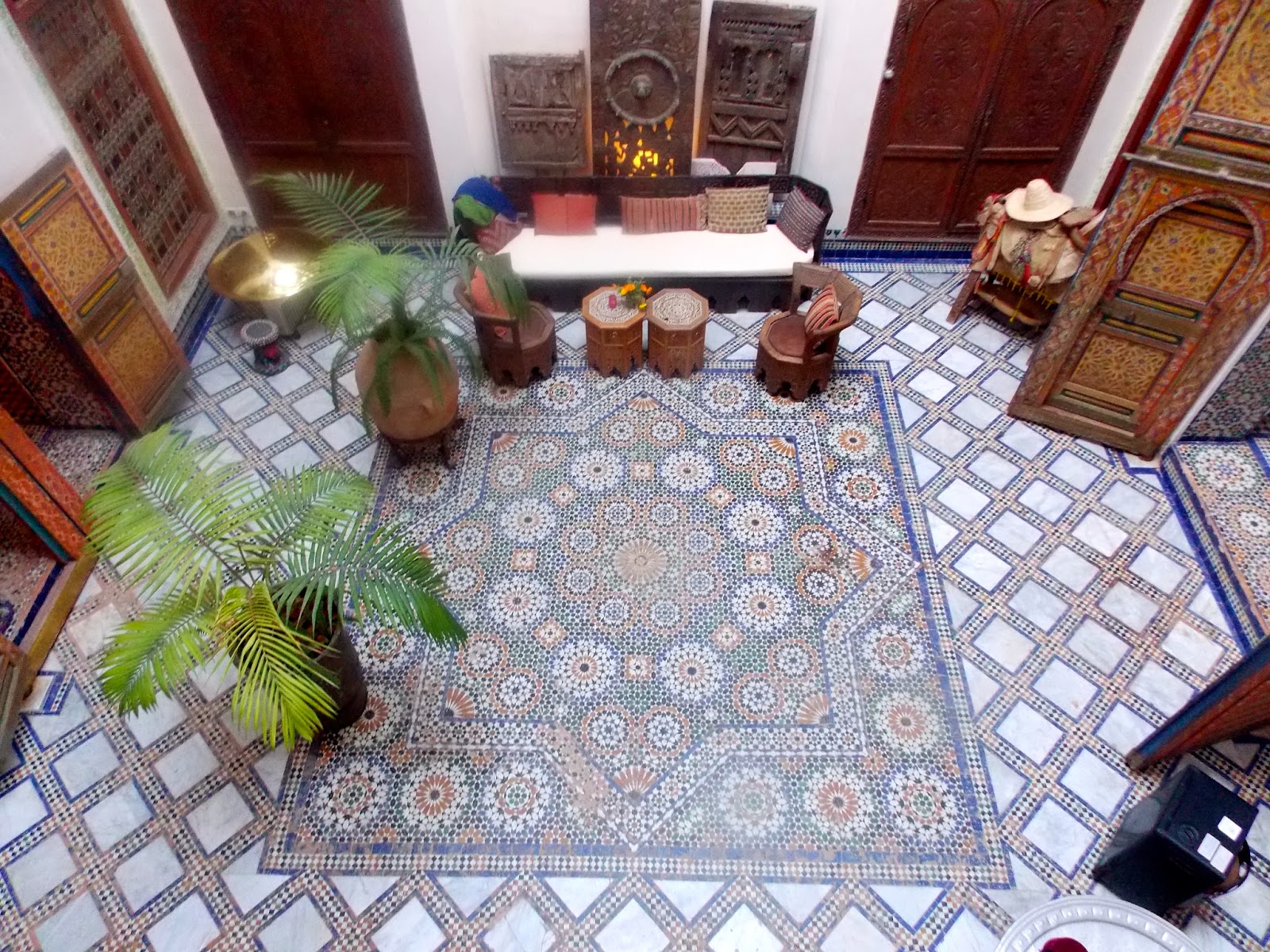 While in Fez I stayed at a Riad in the Medina.  This guest house is a Moroccan version of the B&B and was a pure delight.  Everything about it made me smile.  The architecture, the rooms, the host, the staff, the food...all extraordinarily comfortable and comforting.  It creates this oasis of peace within the sensory assault of the Medina itself.  There are a number of these in the Medina, but the one I stayed at was the Riad Idrissy.  It is operated by a charming English fellow named Robert who bustles about pretty much twenty-four hours a day making everything hold together.  The Riad is anchored by his restaurant, The Ruined Garden.  Located a short walk off the main thoroughfare in the Medina, it can only be accessed on foot. 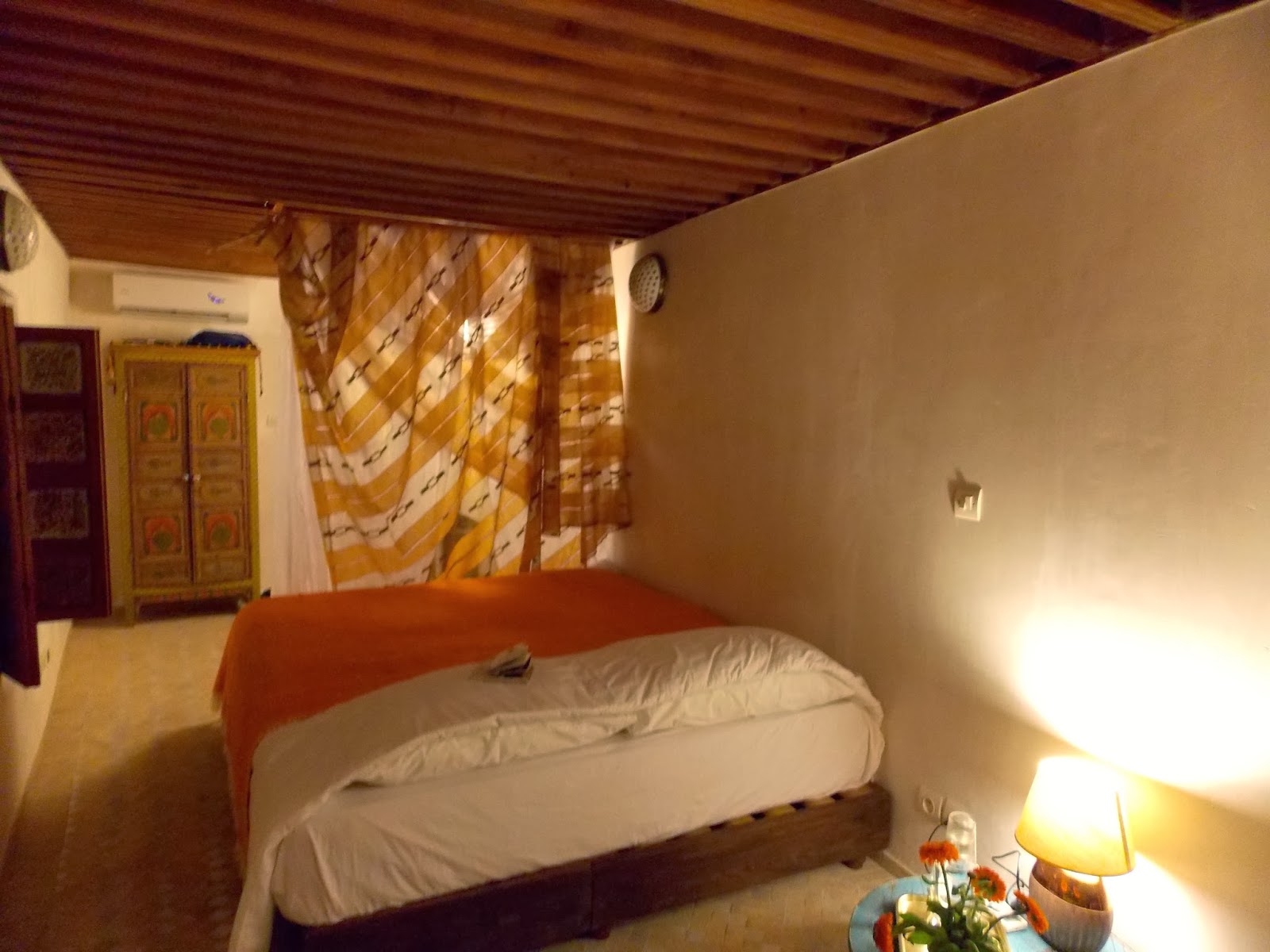 I stayed in their smaller room, The Mezzanine, which was still really comfortable and spacious and overlooks the interior courtyard.  The other rooms have high ceilings and are larger and fancier, but for me this was perfect.  The place cost me $65E per night, which included a great breakfast everymorning.  When I woke up in the morning there would be a basket of tea and coffee that I could take in my room or take to the balcony or garden.

I suspect that any of these Riads would be pleasant, but check reviews and make sure you get a nice one.  It totally makes being in Fez or other Moroccan cities less stressful for the traveler.