Well, that was different. 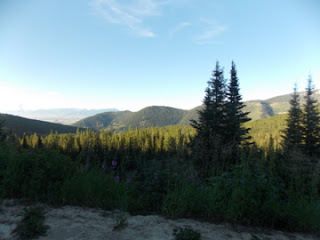 Today's photograph is complements of a series of incomprehensible gravel roads that climb high above the valley in which Bozeman is situated.  My maps suggested that there would be campsites here.  They were wrong.  Badly...wrong.

How did I get here, you ask?  Why, after my careful plan to avoid gravel roads did I climb the side of a mountain on a narrow, winding road that clung to the side of the mountain?

Whimsy, I tell you.  Pure, whimsy.  But let's start at the beginning of the day.  A day filled with the hope of the wilds and the remote.

I left Jackson late in the morning after having spent a fair amount of time in the local Albertsons enjoying my coffee and the boojy atmosphere.  Boojy (spelling completely made up) is a word I learned from Tommy Krueger that designates anything bourgeoisie.  I purchased a panini for the road and headed out, stopping to get the car washed on the way.

The first section of my drive was through the national parks at the Grand Tetons and Yellowstone.  There was road construction throughout, but I had great traffic karma and managed to hit the single lane sections just as my side of the road was ushered through.  I had forgotten how beautiful Yellowstone is.  Green everywhere, dramatic canyons, boisterous rivers, interesting geological activity, and lots of people to watch.  I didn't stop, except to use the facilities at the gift shop at Old Faithful, and pushed on to West Yellowstone.

About ten years ago I spent several days in Yellowstone with Mom, Charlie, Sheri and the kids.  We hit all the high spots, and as I drove through I was enjoying my memories of that journey.  I particularly remember having more adventure in the Yellowstone Canyon than I would haver preferred (lower intestinal distress along with complete panic watching my 8 and 11 year olds galavant along the fenceless rim of the canyon).  It appears to me that the park has made significant ground over the past decade in recovering from the forest fires that ravaged it some time ago.  Areas that I remember as being pretty desolate in 2003 are now covered in the green of ten to fifteen foot trees.

The heavy traffic of Teton and Yellowstone was not on my agenda, however, so on I went.  I arrived in West Yellowstone, collected a new set of maps and suggestions and headed up 191 into the Gallatin National Forest.  191 follows the Gallatin River pretty much all the way from West Yellowstone to Bozeman through a mostly narrow, winding canyon.  There are a lot of those out here.

I'm a little dense, but I am finally realizing that this part of the country is pretty much built around the land that has been created by the rivers cutting through the mountains.  Yes, I realize this is obvious.  Never the less, I understand it differently now.

Once I passed through Big Sky, I encountered a variety of campgrounds along the road.  What is cool about 191 and the Gallatin River is also a bit of what is problematic about it.  The campgrounds are located within sight of the highway, so the sounds that compete for attention include both the river, and the road.  There was quite a bit of road construction, and this added frequent large trucks to the symphony of sound.  There is a campground on Swan Creek that is about half a mile up the hill from the river and is much more isolated.  It really should have been perfect.  It was pretty full, but there were a number of open sites, one of which was tucked beside the creek in a lovely setting.

I stopped the car.  I got out.  I walked down to the creek.  And for reasons that I can't completely explain, I got back in the car and continued on.  Perhaps it was just too much like places I had stayed before...perhaps I wanted some adventure...perhaps I'm an idiot.

The next campground was being used to house construction equipment.  According to the map, if I followed 191 to a place called Gallatin Gateway, a series of smaller roads leads up to a reservoir and two campsites just south of Bozeman.  That was my goal.  It looked like it might be interesting.

Oh, and it was.  Paved roads for a bit, then gravel.  For about three miles the road went through private lands, but a small sign promised the entrance to the national forest was ahead.  Said entrance arrived and the road got steeper, and narrower, until it forked.  Meaningless signs informed me that I could go to the Little Bear Cabin by going up, or follow Little Bear Road by going down.  I went up.

At the top, though the road continued, I was done.  There was no campground, though I did finally find a spot where I might park the car and start a fire.  It was literally the first time there was any kind of spot to pull off the road since the forest had started.  I was tempted, but the steep terrain was more than I wanted to continue to deal with, so down the road and into Bozeman.  I stopped and had a vodka tonic and a gourmet pizza (which was weird, but good...jalapeno, pepperoni, some kind of tasty mushroom...and then slices of raw carrot and celery).

After considering my options for a while I decided to just head for Butte and spend the night at a rest area.  I had been curious about how this might work out now that I am using my car as a tent, and it was quite comfortable.

So, now I'm in Helena and today's agenda is following Lewis and Clark around.  Every day's an adventure!
Posted by Unknown