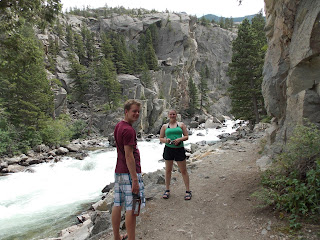 It's now Friday night and I just put Katie and Mike on the bus to Minneapolis here in Billings, Montana.  After the bus left I exchanged a few texts with Katie, who was predictably anxious about this new experience..."I'm not good at new things.  ><"  Katie has struggled with anxiety around doing things that are outside of the known, which is interesting given how much she has done and seen.  I'm tired, and would like to turn on the tv and vegetate a bit, but I haven't collected my thoughts here since Tuesday and much has happened.

The Billings bus depot was exactly what it should be, providing a rich diversity of folks heading for points East and South of Billings (there were two buses departing around the same time).  We found the depot in good order with the use of our sometimes annoying but generally reliable iPhone.  I have just begun using the voice element of the directions and it is wonderful to have a reassuring voice reminding you of upcoming turns...repeatedly.  I find myself talking to the phone.  "Turn left in 300 feet."  "Yup, got it."  "Turn left at Middleton Road."  "I heard you."  "Turn left."  "Fuck off."  It was over 90 degrees in Billings today and if we lingered too long in the street the dust and heat threatened to weather us in shades of tan and brown much like the growing shell that is covering my Prius.  As we crossed the street a gentlemen of considerable girth was swearing colorfully at a cabby who had the audacity to attempt a left hand turn across his path.  It wasn't clear that the cab had, in fact, committed even a minor breech of traffic etiquette, but that was of little relevance or importance to the sweating pedestrian.

We shuffled into the depot and were met with an assemblage of utilitarian but clean and newish metal benches, a single tv, and a set of bathrooms behind a prison-like metal gate that was presently unlocked but could be controlled by the ticket counter staff electronically.  Our pedestrian followed us in an asked if the bus had arrived from the West, to which we could offer no satisfactory response so he continued to ask various folks until he settled in front of us in the ticket counter line.  We had our tickets, and after determining there was no need to check in we settled into a bench to wait.  Mike and Katie are traveling pretty light, with a couple of bags each and a small supply of snacks.  How I Met Your Mother was on the tv and seemed to provide adequate entertainment for the few folks awaiting the bus.  About the time the bus was supposed to arrive, a bus pulled in and unloaded all of its occupants.  They came in all ages, shapes and sizes.  Several headed immediately for outlets to charge electronic devices and reconnect with the digital world, others headed for the bathroom and several sought the heat of the street for a quick cigarette during the possibly brief rest stop.  Everyone immediately reformed a line leading back to the door through which they came in the expectation of loading the bus, and in the hopes of obtaining good seats.  A young girl, tanned and thin with a few bags and a small bongo drum had managed to grab the front of the line, while Katie and Mike figured out what was happening in time to get about a third of the way back.

After a modest wait, during which the bus that had been outside the now shut door drove away, a new bus arrived and it was announced that passengers proceeding to Sheridan and Denver should queue up at door one.  About half of the line stepped back as others stepped forward, and then another announcement followed indicating that the bus to Fargo and Mpls would depart from door three.  This precipitated an orderly but brisk shift from one corner of the lobby to the other, and Mike and Katie managed to do so quickly enough to suddenly be at the front of the queue for the Mpls bus.  The bongo girl was right behind them, and a new period of waiting began.

A haggard looking women with a spunky seven year old boy decided at this moment that the young lad should stop playing with the video games, which he was doing without the benefit of quarters, and use the bathroom.  She cajoled, then threatened, then carried him away with little grace.  They returned, she decided they should get in the back of the line, which he was not interested in.  She then decided that the best parenting strategy was to threaten variously that the boy would be left in the depot, would be given up for foster care, would not see his Father or get a new bike, that she would visit a short list of relatives without him...all of this without any apparent impact other than overt resistance.  At times within this negotiation she would move in close, as if for the kill, and threaten some greater injury in whispered tones, but at a rather highly projected whisper.  I believe she must have finally pinched the little rapscallian, as he suddenly burst into tears but was no more compliant than before.  He finally called her bluff and announced that she was welcome to leave him there and that he wouldn't go to foster care as he would stay right there at the bus depot.  Given the way he was entertained by the games, it seemed a fair deal for him and I was inclined to recommend it.  He was reasonably likely to end up with someone with improved parenting skills.  In any event, they achieved a distant truce in which she hovered near the end of the bus queue and he continued playing imaginary games on the video games.

By this time, Katie was starting to look a bit less secure in her setting, but she was engaged in conversation by those around her and before too long the bus arrived and the door opened.  She handed over her ticket and she and Mike disappeared through the door.  I exited, missing the final sequence in the short film featuring the bad parent and the defiant child, and was able to wave at the kids form the bus garage door opening on the street as they stepped onto the bus.   I called Katie a few minutes later to confirm that they were situated, and she said they were and that Mike was checking to make sure that their luggage didn't need a tag, which it didn't.  The text above was received about fourty minutes later, but the text thread continued for a bit and its seemed like the anxiety she was feeling was more like a ripples gently lapping at a shore as opposed to some kind of roaring rapids.  Interestingly, I was feeling anxiety about having put them on the bus as well, and prior to having Katie text me her concern.  It was odd to send them off...and not because they are too young, since they are both adults and quite competent.  But I have grown used to their presence this past week and in much the same way that I felt some panic over leaving Yoda in a new place I felt it again here.  I am continually walking away from the familiar right now and leaving it with others to whom I am entrusting their care.

It is 9:00.  My clothes will be done in the dryer soon as this is a hotel night where I have showered, shaved, regrouped and am doing laundry.  Tomorrow morning I am driving up into the Big Horn National Forest in the hopes of getting a campsite near Circle Lake.  In any event, I am done writing for tonight and will be off the grid for several days.

Wednesday -- Drove to Helena to drop Heidi off at the airport.  Continued on back to Absarokee to spend the night at the Moses cabin.  Picked up groceries in Bozeman and had a lovely meal with the Moses-Thomsens.

Thursday -- Got up and played nine with Mitch.  Then drove up to the headwaters of the Stillwater River for a short hike and a dip into some really cold water.  Back to the cabin and dinner with the Moses-Thomsens again.  During an after dinner hike we say 21 turkey buzzards in a group battling the high winds that evening.  Also saw over fifteen deer in the fields by the cabin at that time.

Friday -- Did a little cleaning at the cabin then headed into Billings, where we had breakfast and then drove out to the Little Big Horn Battlefield.  Came back into town, checked into the hotel and all three of us took a dip in the pool and then showered.  Had dinner at Texas Roadhouse, and then sent the kids off on the bus.

I have lots of thoughts about people and personalities from the time this past week spent with the three kids and with the Moses-Thomsens.  Great people all and lots of strong personalities.  It makes for a rich soup of communication dynamics that I hope to reflect on these next few days when I am, for the first time in this journey, going to be alone.  I am starting to think about writing here and how to work around the more personal elements of what I would like to explore.  I would like to fiercely engage the truth, or the core, of what I am experiencing, but also wonder how much risk there would be should those musings include observations and descriptions of others in my life.  Not sure about this.  Not sure what I want, what the role of this space is, if there should be a less public space for such writings, or if there shouldn't be.  Something to think about.