Time to Slow it Down

Holy shit!  I have traveled 3,654 over the past two weeks.  All of the actual driving happened during days 1, 6, 7, 10, 13 and 14.  Mpls to Lincoln, Lincoln to Shoshoni, Shoshoni to Mpls (via ND), Mpls to St Peter, St Peter to Absarokee, MT.  I like to drive.  I find it relaxing, though with the long hauls sometimes I get tired and then it becomes work to stay focused and awake.  And, of course, the longer days of driving are exhausting.

In any event, the longest hauls are done.  Although I am going to do a lot of traveling over the next seven weeks, the distances between stops will be consistently shorter.  Today we'll travel about six hours to get from Absarokee to the Big Arm State Park, and that will be the longest of the drives from here on out. 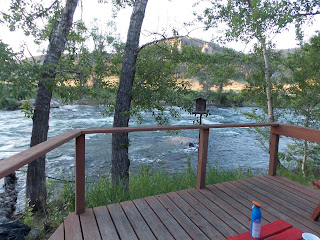 For the moment, its 6:15 and the sun is about to rise over the cliffs of this beautiful canyon of the Stillwater river.  I have brewed a press-pot of good coffee. Katie is awake and taking a shower but everyone else is still sleeping.  Mike and Heidi are out in the bunkhouse, and Mitch, Sue, Luke and Emily are all  in their beds in the cabin behind me. My perch is a faded wooden deck overlooking the rushing Stillwater.  The water is somewhere short of a roar but well past a babble.  There is a swift current and the noise of the river is very similar to the white noise box that I use at home.  It was lovely to sleep to.  The Stillwater feeds into the Yellowstone downstream about fourteen miles from here, in Columbus, MT.  From there the Yellowstone runs through Billings and then northeast to eventually join the Missouri before the Missouri flows into the Dakotas and then south.  It's a set of rivers that I have been crossing repeatedly during the past two weeks, and which figure largely in the tales of Custer, Lewis and Clark.  Last year I read histories of both the Lewis and Clark journey and the battle of Little Big Horn.  For me, those stories have given some context to this vast open land in ways that help to bring it a bit more within reach.

Yesterday, when driving across 212 between Rapid City and Billings we crossed the Powder, the Little Powder, the Tongue and the Big Horn.  Images from my readings rattled through my head with each river, though which ones fit with which river was not completely clear for me, and I have a great desire to go back to the history itself and place the physical spaces within those historical worlds as I walk and drive them.  Its strange to think of these places 150 years ago when there was no highway, no deck, no conveniences that we seem to require; when this was the secure and eternal home of a people that lived in an easy harmony with those spaces.  Well, maybe not easy.  The lives of folks living in a land without the benefit of modern infrastructure doesn't feel appropriate to the term, easy.  Yet, I think without romanticizing it there was a balance and a rhythm that was filled with beauty.  A different pace.  And while the country we have imposed on that space has its own beauty and gifts, there is a poison in the American psyche that must be ultimately laid at the feet of the way in which we violently ripped this land from its native inhabitants and forced a new way of being onto every nook and cranny.

The temp is just shy of 60 degrees this morning, which is a lovely temp and hopefully we'll find something like these temps when we are up at Big Arm in the yert (we're staying in a yert for the next two nights.)  While there is no cell service here at the cabin (we're at the family cabin of Sue Moses) there is wifi, so I'm on the grid today and can post this update.  [Whoops, there's the sun!]  We'll be completely off the grid until we return to the cabin on Wednesday, so I'll probably get my next update in on Thursday morning.  I hope to write while I'm camping this time around by making sure my laptop is fully charged before we head out to the mountains.

The journey from Minneapolis to Absarokee was filled with purpose and activity.  On Friday, after loading the truck with the help of my kids and their beaus, along with my mother, father and step-father, we all went out for pizza.  Chris and Carson stopped by to help out with the loading, and then took off before we finished and ate.  It went well.  I was somewhat stressed, moving ones life is stressful, so there was some negotiating of who got to be controlling about what and when, and for the most part I reserved the right to be controlling as much as I wanted.  In any event, we got it done on schedule and after dinner Dad and I slept in a townhouse that was completely empty.  Saturday morning we gathered everyone together again and drove to St Peter, where we unloaded the truck into the new townhouse.  I surprised myself by choking up a bit when I was thanking everyone for helping with the move.  I was overwhelmed with gratitude for the good fortune I have in my children and my relationships with my parents (and their spouses).  My kids have grown into lovely adults with whom I enjoy spending time.  It's a gift.

Then, after replacing my phone which I had somehow managed to destroy during the move, we (Katie, Mike, Heidi and I) set off in the beautiful sunshine westward toward Montana.  By the time we reached Sioux Falls the temperature was over 90 and we were seeking out a place to stay for the night.  I had wanted to find a quiet little city or county park in which to camp, but the idea of setting up camp in the deep heat was more than I was interested in given the exertions of the preceding several days.  After a great dinner at Al's Oasis, we decided to just get a room and spend the night in the comfort of AC and beds.

To my surprise, we were all up early the next morning and after a satisfying, if simple, pass through the Days Inn continental breakfast and a thirty minute plunge into the remarkable world of Fox News, we were off again.  It's amazing to me how many of these hotels and restaurants across the country select Fox as their station of choice for public spaces.  I suppose they are the most entertaining, if not particularly edifying.  The day that followed was spent in a flurry of tourism.  Mike had not done the Dakotas before, so we made obligatory stops at Wall Drug, the Corn Palace (that was the day before), Badlands National Park, Mt. Rushmore, and Deadwood.  All of these locations delivered their requisite portion of entertainment and joy, and after encountering some road construction and a short yet intense wind and rain storm, we arrived here at the Moses cabin.  [scene]
Posted by Unknown