Through the Valley of Death 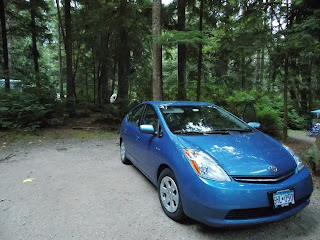 I think in the entire time I was on the southeast corner of Vancouver Island the temperature never got out of the range between 59 and 67 degrees.  The cool breeze from the ocean and the deep forest shade seem to do a remarkably good job of constraining the temperatures here.  It was super comfortably cool when I went to bed last night in the French Beach Campground, and my body heat must have kept the car warm, because in the middle of the night I needed to shed a layer to stay comfy.  Normally in the night that extra layer is important to protect from the plunging mountain temperature swings that I have gotten used to accommodating, but this particular night I was sleeping about fifty feet above the sea.

My late arriving neighbors, who were charming and entertaining as they arrived and set up after dinner, had these cute orangish lights that they hung on the awning of their pop-up camper.  Unfortunately, they forgot to turn them off, so when I woke up in the middle of the night to attend to nature's call, they distracted me and made it hard to fall back asleep.  Not that the distraction was real.  When I closed my eyes I couldn't actually tell whether or not I could see them glowing; but they bugged me all the same.  When I woke later in the night they were out, which made me exceedingly and irrationally satisfied.  I have gotten in the habit now of completely striking the campsite so that when I wake in the morning I literally need only slip on my shoes, attend to nature's business, and off I go.  I shrewdly purchased a travel size Febreze yesterday, so now I can give things a shot of freshness periodically to keep the car from becoming something of a frightening assortment of mildewy smells.  Things may be mildewing, but I won't know it! 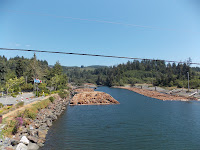 I was up and traveling back toward Port Renfrew by 6:30, and shortly after 7:30 was turning up the mountain and away from the sea to cross over the hills back to the east side of the island.  It was interesting to note that the Jordan River location where I had snapped a picture of logs being held for something was now completely empty.  It appeared that they had all been scooped up out of the river and were stacked for loading onto the steady procession of logging trucks that were constantly moving about the island.  I didn't see another soul until I had gone up the mountain road a few miles, at which point I was passed by a number of pickups and road construction vehicles coming the opposite direction.  After a bit the traffic coming the other way started to include some recreational types...RVs and folks who looked like they were camping or fishing.  The road was small and wound up through the woods without being too daunting but with the usual offering of lovely views throughout.  The morning clouds, which lay along the higher elevations of the
island as well as out to sea a ways, were often sharing the road with me, creating a shifting treatment of grey and white across a mostly grey landscape.  At moments the sun would peak through and the forest would suddenly come to life in shades of gray and yellow, then slowly subside back to its grey morning shroud.

The drive up the west side of the island was a spooky and disturbing affair.  The area has been targeted for clear cut harvesting, and the large sections of land where the trees have been ripped out of the ground and the ground itself is torn and ragged appear out of the fog with increasing frequency.  The presence of the fog, which rendered these fields of destruction grey and lifeless in a cold morning air heightened the presence of death and the sense of wanton destruction.  After a time I realized that while there were extensive areas unharvested and thick with mature forest, and there were increasingly frequent and large sections of blasted and forgotten earth, there was almost no presence of the kind of intermediary sections that would be found, that must be found, if this crazy kind of harvesting is to be sustainable.  Where were the fields of five foot trees, of ten foot trees, of twenty foot trees, of young but maturing pines who were creating new forests whose shade created a complex ecosystem of plants and animals?  All I could see was death and life waiting for death. 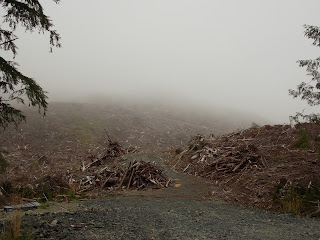 It led me to start to do some math as I drove up the road.  If any given parcel of land required a certain amount of time to recover, the harvesting rate had to follow the pursuant formula.  What was the rate of recovery?  Fifty years?  Seventy-five years?  One hundred years?  Surely a stand of trees couldn't be ready for harvesting in less than fifty years, but one hundred seemed excessive.  In my mind, and for the purpose of the exercise, I settled on fifty years, which meant that at any given time, of the available forest targeted for management, no more than 2% could be harvested in any given year.  If you agreed that half of the land should be excluded from harvesting to allow some replenishment of the original old growth forests...well, perhaps that was wishful thinking.  I drove along in growing horror as I tried to puzzle out how much land was being torn up.  Did it look like two percent?  More?  And even if it were, did they just start this recently...because where were the mid-stage forests?  Clearly the harvesting of trees here is nothing new.  A whole economy and culture is ubiquitously dependent on it.  The island seems to be nothing more than a coastal vacationland protecting an enormous logging industry.

The closer I got to the summit of my drive, the more frequently I began to encounter sections which did, in fact, appear to have been replanted, some as much as ten or more years ago, which was helpful in suppressing my growing sense that the folks with spikes in trees might be more right than I had thought.  As I came out of the fog and into the sunshine at the top of the mountain, the mosaic became even more complex, and after passing east of Lake Cowichan (a recreational hub in its own right) the picture finally came into complete view and I realized that this was an area that had not had recent logging for some time, but that its land was covered by parcels at almost every stage of growth.  Greatly mollified, I turned north when I hit the highway at the foot of the pass and headed for the ferry station.

The whole experience brought into unexpected focus the enormity of the scale of time that exists within the logging industry.  Properly managed, these sections of land need to be replanted and prepared for a harvest that is fifty years or more away.  An amazing idea.

The ferry ride back to Tsawwassen was uneventful, though I found myself musing about the rarity and importance of parental consistency as I watched a young man completely ignore his mother, who threatened various things in an effort to get him to put down his electronic device, which he did not do, nor did she execute her carefully articulated consequences.  Neither seemed very exercised in this ritual, as if it happens over and over again and it hasn't occurred to the mother that if she never does what she says, he'll never listen to her either.

And so a stop for gas wherein I tried to unload all the remaining Canadian currency I had obtained, moved through customs without incident (and in half the promised 40 minutes it was posted to be delayed) and am now in a lovely Extended Stay hotel room where I can cook my own food, clean my clothes, and take a refreshing showers...all compliments of the Expedia discount option.
Posted by Unknown