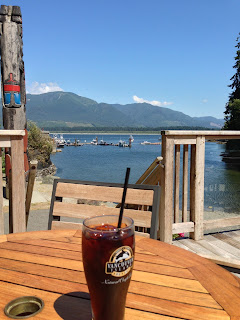 Lunch yesterday was on the sunny deck of the Port Renfrew Hotel, where I enjoyed a grilled ham and cheese sandwich along with a robust turkey soup.  The soup started out with lots of ingredients and a healthy broth, but a dearth of seasoning, which I rectified with fresh ground pepper.  Situated immediately in front of the deck was a small marina connected to the hotel opening to Snuggery Cove.  The other place names along here seem to have a strong connection to the early Spanish explorers, beginning with the larger body of water named the Strait of Juan de Fuca.  It’s cool here, even in the sunshine, with the mid-day temperature barely clearing 70 degrees.

As I did this morning, I am enjoying sitting quietly with my book and my lunch and listening to the conversations of those around me.  There is a fascinating group of folk at the next table.  My best guess is that there is a man and his son, Mike, a man and his daughter, and a woman who might be the wife of the second man, but I had not enough information to be sure.  Their accents were remarkably varied.  Mike’s father I was able to place as Irish, though his accent had multiple influences such that I wouldn’t have placed it without some content clues in their conversation.  His son, Mike, had the slightest hint of the British Columbia accent, which is why I’m not convinced they were, in fact, related.  The daughter had a neutral American accent, and she lives within about three hours of here with her father, and possibly with the other woman, who might have been her mother.  That couple both had strong Germanic accents.  Their conversation when I picked it up began with the Irishman declaring that, “The Americans had 11,000 gun deaths last year.  The next two countries were France and Ireland and they only had a few hundred.”  I’m not sure of the accuracy of this, and I imagine he is leaving out a variety of places outside of the sphere of European influence, but the gist of his argument is correct, we kill a lot of people with our guns.  They went on to express various levels of amazement at the American willingness to tolerate guns, culminating in the observation that the Trayvon Martin situation wouldn’t have happened without guns.  Mike observed that, “He would have bashed his head in,” but the Irishman was unwilling to concede that as a given.  He also opined that liberal and conservatives alike in America want to keep their guns.

I wanted to disagree.  I wanted to explain that many, many Americans are ready to register and limit access to gun.  I wanted to point out that many Americans are only a few generations away from the days when those guns were a fundamental part of their lifestyle as they settled (and stole) the American West and that their sense of fierce individualism is hard to overcome.  I wanted to say that someday we would change.  Of course, none of this was pertinent to their conversation, only mine.  It was interesting to hear their easy condemnation of our attitudes in this area.

On a completely different note, they also discussed the fact that Germans, Brits and Aussies don’t tip well because they have a hard time recognizing that people in the service industry in North America are paid like slaves and need the tips to survive.  The implication is that in Germany, Britain and Australia, service industry folks make a living base wage.  News to me.

As I look across the bay at the forested slopes of the mountain opposite, I see, as I expected, a mosaic of recently harvested areas checkerboarding the view.  On the drive down the coast from French Beach to Port Renfrew, I had passed several areas of this type that came close to the road, and I assumed that the entire area is being managed in a rotation of clear cutting.  When you look into the lush forest by the road, most of the trees are of a similar age, with a few enormous stumps sitting in tattered splendor in amongst them.  No doubt the original old growth forest was clear cut back in the nineteenth century, and since then this raping of the forest is managed carefully.  I say raping because it has the harsh imagery of angry violation about it, but I use wood all the time.  That wood comes from somewhere.  To be fair, the areas not currently cut clear are covered with hundred foot trees and lush vegetation, and my campsite is surrounded by trees some of which with a trunk diameter of over three feet.  I am looking forward to seeing the old growth redwoods later in the week.

Perhaps we are moving to a better place where we manage rather than use and discard, but if so it is a slow process and more than just attitudes need to change.  Somehow the basic cultural paradigm of use has to change.  My little effort to use or have less stuff falls well short of what is eventually needed.  I think about my step-mother Pat, who only travels with efficient public options like the bus or train, and contrast it with my own habits or the norm in society.  With this trip alone, on which I have now traveled over 9,000 miles, I am probably using enough gas to power a small town, Prius or no.

Funny moment in Steinbeck’s book about use and reuse; in describing the American town of 1960 he observes that it is like a, “like badger holes ringed with trash.”  He correctly predicts that we are going to have to find a way to use and reuse the boxes and detritus that accompany our growing consumerism.  In this, he is critiquing and criticizing; but what is amusing is that two pages later he notes with pride that he has found a useful item to facilitate cooking on his travels, “the aluminum, disposable cooking utensils, frying pans and deep dishes.  You fry a fish and throw the pan overboard.”  A different concept of disposable even than we are trying to escape today.

The drive up the coast was quite lovely, and the whole area reminds me of the drive to the coast on highway 26 from Portland.  The forest on either side is deep and green, with mossy trees and an explosion of ferns and foliage.  The Strait of Juan de Fuca is visible through the trees from time to time, and in several places the road bursts out along the shore itself.  I have reached a new place regarding my driving through these places where I am not so concerned with my speed as I normally find myself.  Partially because the metric speed markers are less intuitively meaningful, but also because the appropriate speed changes so markedly from one moment to the next, that I find myself easing into a peaceful and symbiotic relationship with the road and the scenery so that we all flow along and enjoy each other’s company.  Occasionally, someone with an agenda or destination will come along, and I happily ease into a pullout to let them by.  On other occasions, I encounter a slower RV or truck, and sometimes they will let me by.  Sometimes not, which is, I confess, annoying, but some things are immutable.  I lose this when I am trying to cover longer distances using wider roads, but I like this tempo, which I have found most accessible here in Canada.

Another thing about Canada!  They have shifted to using coins for denominations under five dollars, with a two dollar coin, a one dollar coin, and the usual assortment of smaller coins.  Many places round up or down and give you a nickel rather than pennies, but the best part are the names for the coins.  The loon on the dollar coin got it nicknamed, the Looney.  But even better is that the two dollar coin is called, the Tooney.  I think you can make the connection from there!

I am in complete awe of Steinbeck’s writing.  Here is a man who, by his own confession, takes no notes or written record as he moves through an experience, and yet his description is so vibrant, his recollection of the details of the folks he met and talked to so real and believable.  Could he really remember these things that well?  Or, instead, is his creative process engaged such that he reconstructs these memories as he wishes or thinks they were.  We know so much about the brain and how it actually constructs and retrieves memories.  Perhaps by not taking notes he frees himself up to remember his experiences in ways that support the creative elements of his writing.  In any event, I find myself stunned by the quality of his travel narrative.

One thing about my writing on this trip, what began as a commitment to find something to write about daily has become a fixation on capturing and collecting my thoughts as I go.  It is surprisingly frustrating to be driving through the countryside or to be sitting at a meal and to realize that such and such an idea is rattling around and needing to be explored and recorded.  While Steinbeck may feel that he, “cannot write hot on an event, it has to ferment,” I find that for me, the moment an event slips into the recent pass it begins to dissipate.  My life is a series of quickly forgotten episodes, rich in their tapestry but always on the other side of a closed door.  I am moving from room to room in an interesting exploration of some strange and wonderful castle, but I rarely have much of a sense of what was in the room before.  This is part of why though I write, I am not a writer.  The gap between the page and my thoughts is too great.

And a thought about exercise.  I find that I am most willing to set forth and walk sometime in the late morning, before lunch but after some kind of morning process of waking.  Exercising has always been a challenge for me and now that my schedule is completely open I find that I am beginning to understand why.  When I wake up in the morning, I do not want to do anything except pee, get my coffee, and settle into some easy activity.  I do not want to walk.  I do not want to run.  I do not want to lift weights or ride a bike.  I want to sit, and drink my coffee.  Later in the morning, but before lunch, my resistance to activity is at its lowest.  Once lunch is past, then the remainder of the day rarely holds that moment of receptivity for me.  The challenge, then, is to create a lifestyle in which I get up, do some things for a bit, and then have a window of sixty to ninety minutes when nothing else occupies my time and I can set about getting some exercise.
Posted by Unknown