Back to Gravel Roads...

I am making the days notes as the moon rises and the stars begin to come out.  I arrived at the Green River Lake late in the day, so darkness is setting in. 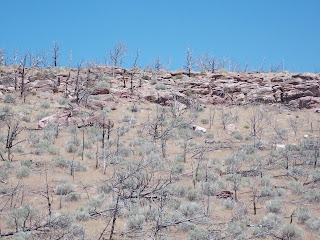 This is my favorite picture of the day.  It turns out that when Juniper stands experience a wildfire, the dead wood bleaches out and what is left is this really striking silver white stand of trees.   This particular stand is in the hills over the Flaming River Gorge Dam.

I left Steamboat mocha in hand around eight this morning and headed off on high way 40 towards Utah.  The plan was to grab Colorado 318 at Mayfair and that would take me into Utah at the Flaming Gorge Reservoir, which looked like an interesting spot to explore.  The car was dusty from yesterday’s adventure in the Rocky Mountain National Park, so I stopped along the way and ran it through a quick wash.  The interior was still a bit dusty, but I figured I would deal with that later in the day.

The route in the morning followed the Yampa River.  I discovered that I could make voice notes with my phone, though my diction is such that they are rather cryptic and baffling.   It is useful for keeping track of things I want to note since my memory is such that lots of things get forgotten.  So, baffling or forgotten seem to be my choices.  Something I said was translated as cannabis, so I think the phone knows I'm in Colorado. 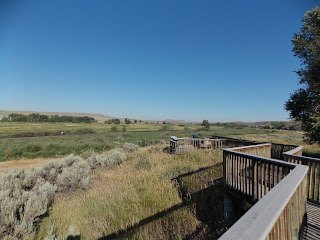 The river valley was very green, with an abundance of deciduous trees and an absence of the dry sage brush look that covers most of the terrain I’ve been traveling.  I can’t recall driving on a road that actually stayed down in a river valley before, so that probably accounts for a lot of it.  It was a lovely drive.  The Yampa flows into the Colorado, so my journey both days has focused on the Colorado watershed.

Eventually the road climbed up to the north and out of the Yampa valley and, boom, sage brush and juniper is all there is to see.  The terrain is dramatic, but its pretty barren.  I’m making good time and heading west when the Utah line appears and the pavement on my route suddenly ends.  Gravel.  I hate gravel. 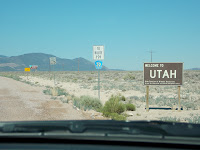 This is not some quaint back road leading to amazing wilderness…this is a through road…gravel?  No explanation, and since I’m off the grid here I don’t really have any clue.  I continue.  And continue.

It would appear that I am in a wildlife refuge of some kind, but also that the road is marked with lots of information about a gas pipeline.  Gas installations of some kind appear (these will become ubiquitous later in the day when I pass 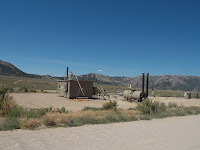 through Wyoming north of 80.)  Up.  Down.  Gravel.  Then, there is a warning of a 14% grade.  I’m not sure my little Prius can do a 14% grade on gravel, when suddenly the pavement returns.  I have pavement all the way up the grade and then the gravel returns, then pavement, then gravel again.  In the end I eventually came to highway 191 by Flaming Gorge, and good riddance.  The car is, once again, covered in dust.

Highway 191 ran down to the Flaming Gorge dam, which stops the flow of the Green River and creates an enormous lake in this canyon.  The name Flaming Gorge comes from the colorful rocks which line much of the lower canyon.  I drove around the south side of the 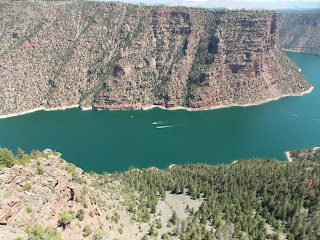 gorge and drove up to the visitor center at Red Canyon.  It has a dramatic overlook as well as some nice hiking paths.  I took advantage of that and got my hike in while I was there.  The wind was whistling through the ponderosa pines and it was a nice spot.  Definitely worth the trip down here, though if you do it stay on 40 and come up 191 from the south.

I continued up the west side of the Green River and, as the helpful young man at the visitor center predicted, I was soon back in Wyoming sage.  The drive from Flaming Gorge to Big Piney has nothing to recommend it, just something to get over with.  I stopped at the ranger station in Kemmerer, (home of the original JC Penney store, by the way) and the ranger there recommended that if I wanted to see Bridger National Forest, I 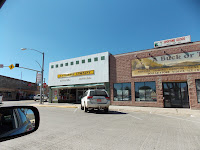 should make my way up to Green River Lake because it was the best spot in the Tetons.  It is the source of the Green River, which flows into the Colorado.  It was going to be a haul to get there in time to set up camp, but if need be I could stop somewhere along the way, so I set off.  My route continued to follow the Green River, and a bit past Big Piney I turned East toward the line of mountains that I could see in the distance.  Before long I was turning north on 382 and heading upriver.  One of my maps showed 382 ending well before the lake, so I suspected that the last section would be gravel.  Huzzah!  Sure enough, the road ended as the National Forest markers began.  The valley was quite lovely, but I was having a hard time seeing how this was going to be as dramatic as the Grand Tetons.

Not to mention that the road truly sucked.  The gravel road ranged from washboard, to rock strewn, to oiled and smooth.  My speed ranged from 8 to 45.  And it went on and on and on.  I started noting places I could stop if I gave up, and there were several really cool spots.  The road was going to have to bend around to the east and then turn south, and slowly but surely the river and road made its turn.  At one point in this section I saw two deer wading through the river.  Then, as the road turned south, huge cliffs started rising up and moving in.  By the time I finally found the campground at the lake, I was surrounded by high peaks rising dramatically around me.  It was quite a haul to get in here, and the sun had set by the time I arrived so I will have to take a hike and get pictures in the morning.

I am going to experiment with sleeping in the car tonight.  I set up the air matress on one side of the back with the seats folded down.  We’ll see how that works.
Posted by Unknown