Back on the Road

After a five day stay in Denver, I have ventured back into the mountains and have landed for the night in Steamboat Springs.

My stay in Denver started on Tuesday after a long day driving down from the Big Horn.  I dropped my stuff at Rachel's place and headed out to Lyons, where I had a delightful time listening to my Uncle, David Greene, play in a bluegrass circle at Oskar's Blues Bar.  The place had a great groove and I had delightful conversations with Bob from New Jersey, Alison and Casey (who were local) and the bartender, Annie.  Lovely night.

The next morning I picked up Tommy Krueger at the airport and we knocked around Denver for the day.  I  moved my stuff to David's, where I spent the rest of the week, and we met Tom, Cindy and Mark at the hotel later in the day before heading for the opening reception of the EDTA Leadership Summit.  It was a good Summit, generating lots of ideas for MN Thespians and getting our five board members excited about the upcoming year.

Thursday night three of us saw Rachel's show (Fiddler on the Roof) at the Denver Center, which was fabulous.  The 16th Street Mall in downtown Denver is pretty cool, with a diverse assortment of folks hanging out and passing through.  It is very open in its design, so people are encouraged to pause and enjoy the spaces.

After dropping Tommy at the airport this morning I headed for the mountains, intending to go in through Rocky Mountain National Park and to drive the Old Falls River Road that climbs up the North side of the park.  From the moment I hit Boulder I was hitting tons of traffic.  A Sunday afternoon in July is a bad time to go through this area.  Estes Park was a zoo, so I slid around downtown on 34, and when I hit the park there were lines to get in.  I figured it would thin out on the Old Falls road, since it is gravel and somewhat treacherous, but I was completely wrong.  I spent the whole 11 miles eating the dust of the long line of cars that moved painfully slowly in front of me...sometime stopping for no apparent reason.  By the time I got through the traffic jam in the visitors center at the top of the pass I was desperate to escape the park.  I made one short detour to the summit to walk up to the geological marker and then headed for the exit! 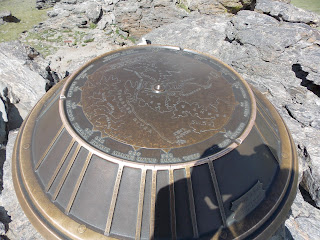 Once I got past the loop that folks take up and back from Estes Park, things were much quieter.  Soon I crossed the Continental Divide and almost immediately began encountering the Colorado River.  At first it was the size of a small creek, and then as it flowed down out of the park area it quickly got larger until it was cutting a path through a lush valley.  The sides of the valley were carved with steep formations, making it already suggestive of its eventual grand path in the Southwest.  It was beautiful.  Eventually, the Colorado turned southwest and my path turned north.  As soon as I passed over the ridge above the river the landscape dried out and it quickly became reminiscent of the barren sections of Wyoming.  This continued until 40 cuts through Rabbit Ears pass above Steamboat Springs, where it was heavily wooded and then opened up to the valley where I am now enjoying the evening.

Having arrived late in the day and with temps in the 90s, I have a hotel room for tonight, but tomorrow we'll see if we can find a good spot in a forest for a camping night.  Meanwhile, it'll be good to sleep in a bed one more night!
Posted by Unknown