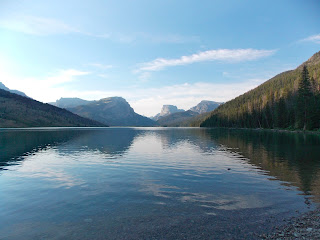 Despite the difficulties of navigating the road in (and it wasn't any more pleasant driving out, either) the ranger gave me a good tip when he recommended Green River Lake.  The area is quite beautiful, and even though it was a pretty busy area with lots of folks fishing, boating and hiking, it was definitely a bit more of a wilderness experience than I had on Monday.  Using the car as a tent was a good idea.  The air mattress on the folded down seat was quite comfortable.  I had cracked the windows open, which was less beneficial when the temperature dropped to 36 degrees!  The only difficulty was that the full moon was extraordinarily bright, and it might have been darker in the tent.  Still, it was nice to be able to get up in the morning and not have to strike the tent.  And after zipping up the sleeping bag around four this morning, I was plenty warm.

When I got up, I went down to the trailhead by the lake and, as advertised, it was quite beautiful.  Surrounded on three sides by high peaks, the lake is a very special setting.  If you are looking for a place to bring a canoe and do some fishing and hiking, this would be the place.  Be warned: you have to drive 25 miles north from 191/187 to the end of the pavement, and then another 15 miles on a rough gravel road, but it's worth it. 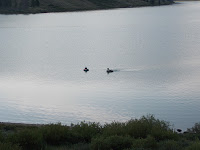 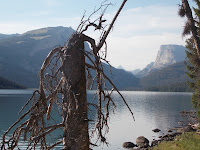 I was hiking around the lake at about 7:30, and encountered two bundled up backpackers heading in-country, two hardy fisherfolk floating around the lake in innertubes, and a trio of guys putting their boat in.  When I first got down to the lake, I heard a cacaphony of voices that at first I thought was the annoying group of children using the campsite above me, but quickly realized that it was, instead, a pack of young coyotes barking up a storm up on the mountainside.  I tried to pull out my phone to record the audio, but wasn't quick enough.  It was a great morning of wildlife, including ducks and other birds, pika, a moose, and antelope.

I also saw a hoofprint which was quite large.  The prints followed the edge of the lake for a ways and I assume they belonged to a bighorn sheep, since they seemed to large to be antelope or regular deer. 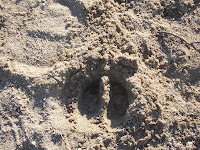 I took a variety of pictures and hiked around for about an hour, then got in the car and headed back to civilization.  The moose was standing on the road an area shortly past the return of pavement.  He(She?) was standing right in the middle of the road and when I approached he stepped off, and then since I stopped he wandered back onto and then across the road.  He paused right on the edge of the pavement and stood looking at me.  Had I not slowly started moving the car toward him I think he'd have stood their all day. 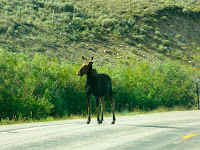 Once I hit 191 (which was at about 9:30 and the temperature was already close to 70) I turned north toward Jackson, following 189 along the Hoback river.  Hoback runs through a narrow and very picturesque canyon with several camping sites available as a part of the Bridger/Teton National Forest.  These sites are right along the fast flowing river, and would be great spots to spend a night.  For my money, the Hoback valley and Green River Lake are two dandy destinations in Bridger.  There is also a large section of the forest west of 189 that I did not explore.  When 189 hits 89 below Jackson, the Hoback flows into the Snake River.

So, here I am now in Jackson, which feels a lot like Steamboat Springs...busy and commercial.  I want to check out a thing called the Teton Treehouse that is somewhere here in Jackson, and then I plan to head north.  Yesterday I bought a physical US Atlas and I am going to highlight and notate my route so far.  Although I've wound around in Montana, Wyoming and Colorado (even Utah briefly) I don't have a good handle on the overall picture of how the mountains move through these states, and so today, before I go further, I'm going to sit in this comfortable Starbucks and do some learnin'.


By the way, I'm not doing it because its out of the price range of this journey, but if you get a chance, go to the Teton Treehouse B&B!