Responsible Living Will Doom the Economy

Friday morning started at 6:45 at the Toyota dealer because my car was making a whump, whump, whump noise in the vicinity of the front left tire.  Turns out a bearing was bad, covered by warranty, three hours and a $100 deductible later, off to my day. 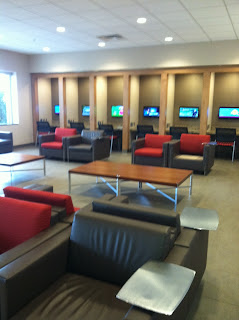 The waiting area at the car dealership was sort of like a lounge at a nice restaurant.  Several large tvs as well as a row of cubbies with individual tv sets so you can watch something different.  Lots of chairs, free fancy coffee as well as donuts and cookies, all presented in an attractive little dining area.  Very comfortable.  Lots of comfort.  Stacks of newspapers.

Which allowed me to read more about the farm bill the Senate passed recently.  It is hard for me to understand how a Democratic controlled senate will pass a farm bill that increases support for large corporate farms while cutting food supports for the poor.  It was a sad commentary on priorities, which, of course, was heightened by my sitting in this luxurious support for more conspicuous consumption.  In the same newspaper was an article in which a reviewer extolled the benefits a $250,000 Bentley sedan without irony as if it were a vehicle that we all should desire to own.  13 mpg and $250K.  Really?

I was reading a trashy historical fiction novel set during the French Revolution and its hard not to see a few recurring patterns.  Of course, we have progressed to the point where, for the most part, the poor and downtrodden are not living well, but are also largely not starving to death.  They may not have good healthcare, they may not have comfortable housing, they may not receive equitable justice, but the bottom end seems like its high enough for the system as a whole to avoid revolution.  At the same time, the eroding of the middle class is a significant systemic problem.  If you assume that the folks who are the most successful are at least partially successful due to competencies, then you would expect that they would have some interest in the system as a whole being well organized for the success of the system as a whole.  That would operate more dynamically if the problem were more immediate, but for now the growing inability of the middle class to consume sufficient product to sustain the system is increasingly fragile, but not completely lost.  So, little change occurs.

Meanwhile, at a more micro level, I keep getting rid of stuff.  In my own little way I am contributing to an economic decline by choosing to consume less.  Sorry!
Posted by Unknown