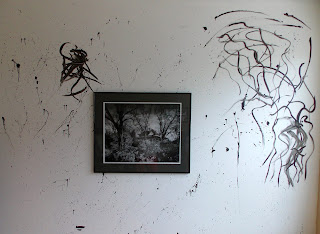 This morning we painted over the art wall that Katie created a few years ago.  She asked if we could splat paint on a wall and I surprised her by saying, "Sure."  We painted one wall in the living room white, and then she splattered black paint on the wall...and some of the floor and ceiling, but mostly on the wall.  I have a black and white painting that I like a lot which we placed in the middle of the wall, and the effect was pretty cool. The face on the right side of the picture was completely accidental.

So, the art wall is gone...fortunately we remembered to take pictures before we painted it over.  Katie pledges to do it in every house she owns.

Another change today was we put a collar on our two year old cat.  She's going to be visiting other folks this summer while I'm traveling, and I may let her transition to being outdoors some when I'm in St Peter, so its time to make her wear it.  She is not happy about it.  She actually seems less playful.  To some extent, I'm projecting my own thoughts about the collar onto her, but she also is clearly not happy about it.  We'll see how it goes.

Its a funny thing about projecting your own thoughts and feelings.  I had someone observe recently that my concerns about a particular person not approving of something was just a projection of my own feelings...and it occurred to me that this is something I do rather frequently and deeply.  My first assumption is that folks do not think positively about me, and this is rather foolish.  Folks who don't do this have a distinct advantage socially.  Its sort of the same as how folks who just ask for what they want regardless of the likelihood of success have an advantage over folks who only ask when the answer is going to be, 'Yes'.

Goals...less projecting and more asking for what I want.

And this morning I have a pain above my ear.  I think I strained something in my neck while moving furniture on Wednesday and the consequence is this really odd sharp pain that radiates from my neck up and over the back of my ear.  I'm only 51, but the system is not as resilient as it was twenty years ago.  Better loosen up a bit more before the summer hiking begins!