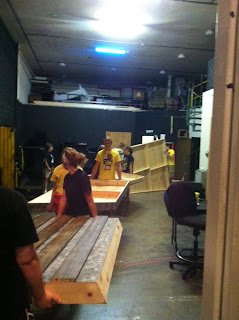 Today's photo features Wednesday night's load out of the set for The Pitman Painters.  There was a brief traffic jam, resulting in an amusing line of patient students.

This is a script that was new to me and tells the story of a group of painters who began their work in a class for miners in England in 1934.  These miners showed up for an art appreciation class and before too much time became artists in their own right, sparking much curiosity about the proper domain of art vis-a-vis the working class.

Saw lovely productions of Over the River, and Through the Woods, [Title of Show], and Gruesome Playground Injuries.

Interesting to watch the cast of a production of Anatomy of Gray at the moment.  They are working really hard with diction and projection, which is cool as they are planning to do the show without microphones.  One of the issues for straight shows here at ITF is that they have to decide if they are performing with or without microphones.  Normally, one would say that microphones for a non-musical is not recommended; however, the students are not trained to project in spaces as large as the theaters here at UNL, so it can be a challenge to hear them if they aren't miked.  If a school does choose to go without microphones, then the kids really have to work diction, which can stand in the way of characterization for the young performer.  It's interesting to watch a group that has landed on the side of losing characterization in favor of being heard clearly, as the typical outcome is the opposite (characters that can't be heard or understood.)

Dad arrives here in Lincoln tonight, and we're off to Wyoming tomorrow to begin the next phase of the summer journey.  I'm not sure what internet access will be like as this next stage begins, so it may be that there will be less frequent posts that accumulate images and experiences...unless we get eaten by a bear, in which case we'll be done.  In any event, no more theater for a while.