Another Day at the International Thespian Festival... 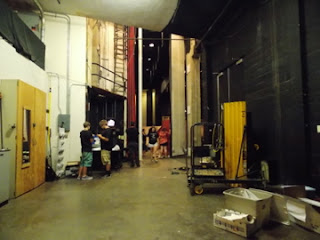 Today's picture features the stage left wing of the Kimball Recital Hall at the University of Nebraska campus.  The Kimball is the second of two mainstage theaters hosting performances for the week long International Thespian Festival.  At the moment, the Thunder Ridge High School from Highland Ridge, CO, is loading in their set for tonight's performance of Lend Me A Tenor.

ITF is an amazing event for high school theater students.  About 3,000 students from across the country converge on Lincoln for a week of performances, workshops, socializing and learning.  Schools bring everything from individual monologues to fully produced major musicals.  The schedule begins with an early show or two on Monday evening, and continues every day through Saturday night.  This year, the two theaters are hosting Lend Me A Tenor, The Color Purple, Legally Blonde, The Crucible, The Pitmen Painters, Coram Boy, [Title of Show], The Elephant Man, Over the River and Through the Woods, 13, Gruesome Playground Injuries, Anatomy of Gray, Peter Pan, and Shrek.  There are also dozens of one acts and ten sessions of workshops.  Every night after the evening show there is a dance, and the adults are treated to a lovely reception with great apps (no alcohol for obvious reasons...don't want a bunch of drunk chaperones!)

I've been attending this event with the Roseville theater students since 2005.  We typically bring around 20 students and most years we bring a one act.  It's a great part of our theater program.  For the past four years, I have been one of the Theater Coordinators who help manage the Kimball theater, which mostly means I sit around and update my blog while other folks busily load in, perform and load out.  I'm here in case something goes wrong, which is super unusual.

For the kids, a typical day starts around 8 or 9 with a quick breakfast in the dorms, then off to the first mainstage show at 10am.  After the show we have a troupe meeting and then its off to lunch.  Afternoons have two workshop sessions and one acts in two venues.  Then its dinner and off to the evening mainstage show.  After the show, attend the dance or other social activities (Improv, FX Flying, hanging out in dorm) with curfew at 12:30 and lights out at 1:00am.  Get up in the morning and do it all again.  Within that we also have kids doing college auditions, individual performances, meeting with college representatives, participating or seeing the Playworks program, sitting by the fountain, taking a nap, drinking water, cooling off in the student union...it's a busy week.  Sunday morning they get on the bus and sleep most of the way home.

Since I'm working in the Kimball, I do catch a few one acts and shows, but mostly spend the week talking with colleagues and students.  Attending ITF is a relaxing, though hot, tradition that has marked the official end of the academic year for me for the past nine years.

I'm hopeful that I will be able to continue doing it next summer, though that will depend on what kind of internship or travel I end up with.  It's possible I'll convince MSU to send me as a college rep.

Meanwhile, this year we have new schools attending from Minnesota, which is exciting.  In addition to the usual schools who come down for ITF (Edina, Roseville, Blaine and Centennial) we also have students from Chaska, East Ridge, Burnsville, and Shakopee.  Hopefully it will keep growing!