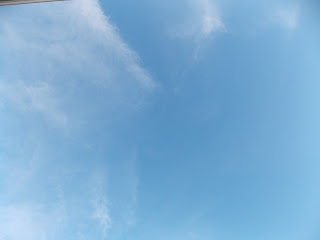 I offer two images today.  The first is a picture of a blue sky above my home.  A few clouds, but mostly just blue sky.  This is newsworthy.  It is exceptional, even.  We have had little of it this past Spring.  In particular, we have had very little of it the past 72 hours.  Friday morning there was a significant storm leaving many without power, Friday night there was another storm, this one leaving 200,000 folks without power as well as ushering in the end of an exceptional number of local trees.  There was no centralized event, like a tornado, that focused the damage on a particular neighborhood, instead there are widespread instances of lost trees and downed power lines.  Facebook is filled with updates related to the consequences of a lack of power.  Or updates that power has been restored.  We were out for twelve hours, others for 30, 48...others still waiting with the expectation that it will be Tuesday or Wednesday before things are back to normal.  No news regarding injuries or deaths, thankfully, but rather a shared experience of disruption, mostly leading to acts of kindness, generosity and support.

For myself, perhaps the oddest experience is the many intersections without functioning traffic lights, including some on major highways.  It was an eerie feeling Friday night to be at an intersection where folks normally travel at 50-60 mph and just heading across hoping for the best.

Before offering a second image, I have some news of the move updates to provide in a bulleted list.  I haven't posted in a few days, so for them that care, here are the updates. 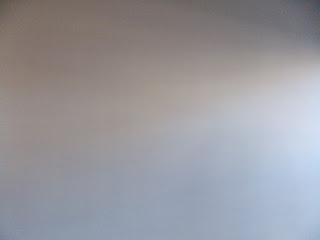 This is the art wall.
It is no longer art.
It is, in fact, Sienna Sand 8223M, which Hirschfield's was kind enough to match at $43 per gallon.

And while it is not particularly interesting, when taken as a part of the townhouse as a whole, which is not empty, but feels empty since everything is in boxes and the furniture stands idle, it is actually possessing of both beauty and significance.

It is an empty palette about to take on the characteristics of new occupants,.

It is also a signal, a symbol, a metaphor (if you will) of the blank slate that is, at this moment, me.

Not that I'm a blank slate.  That's neither possible nor particularly desirable.  Merely interesting.

Yesterday I realized that today, Sunday, would be my last day actually living here.  That I leave on Monday only to return briefly for the purpose of physically moving my stuff to somewhere else.  After roughly sixteen months of process and preparation the moment of launch has arrived and yesterday that was a bit scary and daunting.  Today less so.

Yoda will be here holding down the fort.  She is, without knowledge, the constant.
Posted by Unknown