In my November posting I described the beginnings of my weekend in Maine.  I really should have just gone ahead and done the rest of that entry then because now it's January 30th and how the hell am I supposed to remember what happened on December 1st and 2nd.  Oh, well...here goes.

So on the morning of December 1st I got up at the B&B to a lovely breakfast.  A ham steak, eggs easy over, seasoned potatoes, fruit, OJ, hearty toast...all very nice.  Thanks Matt!  And off to the University of Southern Maine for the conference.  It was COLD and I was walking...it was only about a mile but even for a Minnesotan it was cold.   All I had was my leather jacket...which is stylish but not the right thing for that kind of weather.  So, up the hill to the conference site and I'm hanging out and generally enjoying being available but not responsible for much.  David Sumner did an interesting keynote about design and theater careers.  It was kind of funny, because on the one hand he pointed out to me the night before that no one had ever asked him about his MFA in design, but on the other hand in his keynote he spoke at length about the importance of being well prepared by an MFA program to be competitive in the real world.   Whatever!  It's kind of the same as my conversation with Brian this morning...the MFA isn't going to get you anywhere, but on the other hand, it can be a meaningful place to learn craft.

The day went well and it was late when I got back to the B&B, so a little nightcap but that was it.  Saturday was at the High School in Gorham, so it was a shorter walk but still cold.  Did some judging and was useful doing this and that, but mostly watched and relaxed.  Lots of useful insights about running a conference that I was able to bring back to the MN group that Sunday. 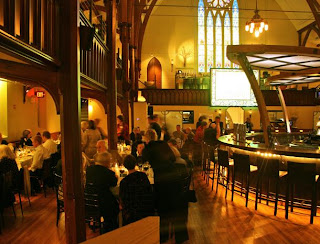 Good story...so at the end of the day on Saturday, Rick took Dennis, Rob Ackerman, the ITO (Jackie), myself and Rick's wife out for dinner at a restaurant that is located in a church that goes by the name of Grace.  An amazingly beautiful place...pricey...but really wonderful.  Again, had lobster and lots of really delightful food and we were enjoying the meal when what to my wondering eyes should appear, but about fifty to seventy Santas along with an assortment of odd winter characters of similar ilk.  Apparently, Portland has a thing it calls Santacon.  Folks are encouraged to get on their santa costumes and bar crawl starting at 9 in the morning.  It was pretty bizarre...they were still there when we left...I think Grace might have been the final stop.

Another good night's sleep, a good journey home, and that was my Portland journey.


Oh, it's worth mentioning something from the flight home, I'm on this plane and the woman next to me has whipped out her makeup bag and begins applying lots of it...pretty much constantly.


How do you communicate a life?  This is a question that I noted in the draft of this blog post, and it is interesting to be finishing it now that I am in the midst of the actual interviews.  Indeed, how do you communicate a life, or a change in life.  I know that I am a good fit for an MFA Directing program, but how do I show that?  How do I let people know I'm not crazy without having them actually meet me?  My current aspirations don't seem to be translating well into the normal application process for graduate school.  Putting it on paper doesn't read, and it's not like I can just create a video that does it much better.  It seems to require a conversation and an opportunity for someone to get to know what I'm about -- which is problematic...see post titled On Timing.

Interesting post about MFAs.  This is an article I need to look at more closely.  When I am ready to DO theater again, this has some great ideas about how to do it.  There is also some useful suggestions for reading, etc.

I wrecked my car in December.  In a parking lot.  Really.  Going like 5 mph.  Totalled.  I loved that car...but here's the weird thing...I still have it, well sort of, I have its sister.  Two years younger, a few less trips around the block, a bit perkier in the interior.  And the money worked out really well -- lets hear it for good insurance.

Christmas decorating this year was kind of an expression of impending change.  We took out everything from the holiday box...everything...and hung it around the house without concern for aesthetics of any kind.  It was fun and festive.   We left the village houses up...they will get packed in May...and we had put the fake tree out on the deck and just as we were going to take it down it bent over and died, so it's off to the landfill with it.  Change is everywhere.

Not much to say about January...it was a waiting month.

Saturday I have interviews with Iowa, Indiana and Florida State.  The question is, what do I say in the first five minutes that gets them to keep the file open and think about me as a candidate for their program rather than for the funny farm?